May 2017    Politics, Religion, science and technology 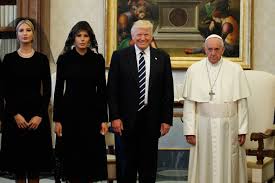 The Holy Father and President Donald Trump finally had  a face to face meeting yesterday which, as accounts have it, began rather awkwardly, but soon warmed up (although the Pope still looks rather stony-faced in the group shot afterward) as the two discussed various topics for half an hour, snippets of which were revealed, striving for peace at the top of the agenda.  I hope this is the beginning of an ongoing and fruitful dialogue and cooperation, in the vein of Pope John Paul and Ronald Reagan.  There are, of course, deep differences and divisions, but one can always hope.  Trump certainly seemed elated as he left, effusing many thank you’s, calling the meeting one of the great honours of his life.  Furthermore, his womenfolk, Melania and Ivanka, wore black and were veiled, something they did not do for the Islamic king of Saudi Arabia.  Good for them. Also, Melania, a Catholic, when the Pope gave her a Rosary, asked if he could bless it.  Perhaps she will in turn use it to pray, even, who knows, with her husband. A nightly Rosary in the White House chapel would do wonders for the world, not least in this Fatima year.

All well and good.  But I cannot leave this theme without mentioning that the Holy Father, along with his Secretary of State, also emphasized in the meeting the importance of ‘climate change’, especially in light of the upcoming Paris talks on this never-ending theme, gifting Trump with an signed copy of Laudato Si, his encyclical on ecology and the environment. Pope Francis is likely aware of Trump’s denial of the reality of climate change, or at least its full surety, which I for one share.

Of course, the Holy Father is free to think what he wants, but his magisterial authority, limited to the realm of revealed doctrine of faith and morals, does not extend to the scientific hypothesis of ‘climate change’.  Come to think of it, neither does the authority of scientists, for, as I have written before, there is no way to prove nor, more importantly, disprove, climate ‘change’, which is claimed as responsible for flooding and for drought, for its being too hot and too cold (as Katy Perry might sing), for wind and for rain (a la James Taylor), for too many hurricanes and the curious lack thereof, for the extinction of some species and the proliferation of others, even for climate-change-induced depression and anxiety amongst suburban scientists, frustrated by all the denying they must face.

At least the hypothesis of ‘global warming’ had some semblance, however remote, inchoate and largely unproveable, of a scientific basis.  It is by and large, in practice, impossible to measure the changing temperature of something as large and as old as planet Earth.  More to the point, even if one could, it is in practice nearly impossible to determine and distinguish the multiplicity of causes of such warming or cooling, but one could at least in theory try.

Now the boogeyman of ‘climate change’ is posited as a cause for nearly every, well, let’s just put that at every, ecological phenomenon.  There was our own Prime Minister the other day invoking this spectre in his comment on the recent flooding in Quebec and around Ottawa.  How does one ever disprove a hypothesis which is a truism, for the climate is always changing?  A simple question I might posit is:  Does carbon dioxide cause global warming, cooling, neither, or either?  How does it produce the purported violent and fluctuating weather systems?  Can anyone trace the causal link, which any science worth its name must do? We should recall that CO2 is not a pollutant, and is the stuff which plants breathe, and plants in turn produce our oxygen. Of course, too much of a good thing is always too much (except for charity and grace), but how much is too much, and why?

There are many things in life than men nor Man can ever change, and one of them is the weather, which will come and go, here on Earth and on planets and stars throughout the universe, little affected by our activity.  The primary (natural) determinant of our weather (besides the occasional divine intervention) is, of course, the Sun, and just try modifying that immense and imperturbable object.

As the serenity prayer, attributed to the 20th century American theologian Reinhold Niebuhr, would have it:

Yes, there are many things that we can change, and it is best, I would gently posit, to focus our limited time and energy on those.