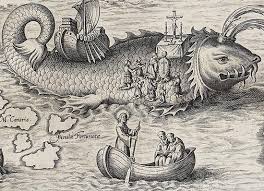 Today commemorates Saint Brendan, the sixth century Irish monk, the ‘Navigator’, whose main claim to fame is a supposed seven year trans-Atlantic voyage in a boat made of animal-hides upon which he and sixteen others embarked, with the discovery of North America many centuries before the time Cabot.  Many considered his journey pious legend, a fantastic mediaeval tale like many others (and it does contain a number of fantastic elements).  That is, until the voyage was re-created, with the same mediaeval materials, by Tim Severin in 1978, chronicled in the book and film The Brendan Voyage, demonstrating that Brendan’s voyage was at the very least eminently possible.

There are many things that Brendan can teach us, but one of them is the limited value of human hubris.  We in our modern smugness presume that we are more advanced, morally, spiritually, intellectually than any culture or civilization that came before, a consequence of the virus of the evolutionary paradigm, that things will always proceed upward and get better with time.

Not so.  Advance is possible, certainly, but so is regression, evolution along with devolution.  In fact, the second law of thermodynamics states that greater perfection can only be achieved by expending mental and physical energy and effort, without which things generally proceed into entropy and chaos.

Who is to say that the monks, and the contemporaneous Vikings, did not have better boats than we?  Certainly, the Romans were far more adept at building natural amphitheatres than modern man.  To this day, you can hear a pin drop on the stage even in the ruins of one of their outdoor auditoria, utilizing to the maximum in some mysterious forgotten way the surrounding natural features, while we still struggle to build decent concert halls with all of our ‘space age’ materials (cf., the expensive renovation of our own already-lavish Roy Thomson Hall in 2002 due to the poor quality of its acoustics).

Certainly, on the spiritual plane, we have much to learn from our ancestors, which is why the Catholic Church remains so immersed in tradition and history, in her saints, their writings, their experiences, even their journeys and the people they evangelized.  We ignore to our peril the great holy men and women who preceded us, and, as Chesterton alludes, one of the unholy evils of ‘modernism’, amongst the many of that multi-headed hydra that Saint Pius X described as the ‘synthesis of all heresies’, is that something is good and true just because it is modern.

Sometimes, many times, it is the old that is truly good and truly true.  At the very least, it has stood the test of time.

In the present context, I for one like the pious thought that an Irishmen discovered Canada many centuries before a Frenchman.  But, then again, they both claimed Canada for the Church.