Brittany Maynard took her own life on November 2nd; one might almost say ‘appropriately’, as it was the commemoration of All Soul’s in the Christian religion, but, then, there is nothing really appropriate about suicide, whether assisted or not.  You may recall that Mrs. Maynard, a young and beautiful newlywed, whose story, incarnated by the image of her pleasant face smiling into the camera as she curled up in a hammock, became an internet sensation. After receiving a diagnosis of a terminal cancer, an inoperable neuroblastoma, a type of brain cancer that causes significanat debilitation in its victims, mental as well as physical, she resolved to commit suicide on November 1st.   Mrs. Maynard wanted to go into that ‘great goodnight’ before becoming dependent and a ‘burden’ on those around her, taking her life into her own hands, so to speak.  She and her family moved to Oregon, where so-called ‘assisted suicide’ (which is really physican-assisted murder, that goes by the curious euphemism euthanasia or ‘good death’) is legal.  She wrote at the end of October that she may not keep her original deadline; I hoped perhaps she was going to change her mind, but, alas, in the end it was not by much.  She took the prescribed barbiturate concoction the day after her original intended ‘date with death’, surrounded by her family.

Suffering is always a difficult thing, and as a man blessed by good health, and unaccustomed to its more extreme forms, I hesitate to judge anyone’s response to real pain.  Of course, by its very nature, suffering goes against our nature, or at least our current state of comfort.  Yet, we must all agree that some suffering is necessary for us to grow as human beings.  The adage no pain, no gain is true in the main:  Virtue is only tested, and only grows, in adversity.  We need to test our bodies with exercise, and our minds with study, examinations, discussion and vigorous debate.  Our moral virtue is tested and perfected by adversity, especially by living with others, and being patient with their faults and defects (and they with our own!).  ‘Vita communis mortificatio maxima’, as Saint Philip Neri said.  A world of continuous comfort and ease would lead us quickly to the condition of the humans on board the spaceship in the animated feature Wall-E, fat and lazy, large lumps of concupiscence, too bothered even to lift a glass to our lips, everything automated and at the reach of our fingertips.  There are those out there not far from this condition, their chubby fingers twiddling joysticks in front of computer games, ‘eating chips off their chest’, as Weird Al so aptly put it…

So, we need suffering to become fit, intelligent, holy and virtuous.

But what happens when suffering becomes, from a natural point of view, pointless?  When the suffering is just simply debilitating, where we lose our fitness, our beauty, even our very intellect?  This is real suffering, whose origin and purpose are, from our human point of view, mysterious.

A good place to start for an answer is the Apostolic Letter Salvifici Doloris Pope Saint John Paul II wrote in 1984, and promulgated fittingly on the feast of Our Lady of Lourdes.   The Holy Father meditates on the purpose of suffering, especially when it seems to have no point.  Such suffering, he writes, only makes sense in the light of the Cross and Man’s eternal destiny.  There is a spiritual dimension to suffering, that transcends the ‘here and now’ of physical pain.  We suffer to gain spiritual perfection, for patience and resignation to God’s will.  We suffer to ‘atone’ for the effects of sin, both our own, and for others, so-called ‘vicarious suffering’.  For suffering is the means by which the God-made-Man, Christ, chose to redeem the world, and He asks for our cooperation in this work of redemption, as members of His own Mystical Body,

There are a posteriori arguments against applying such euthanistic practices to human beings.  Where would we draw the line?  Would people be put to death who are healthy?  Who chooses whom is going to die?  Who writes the rules?  The experience of the Nazi euthanasia practices in the 1930’s should alone be enough to give us pause.  They began by euthanizing psychiatric patients (the mentally disabled) and ended up killing anyone who disagreed with them, or whom they considered untermensch.

These are good arguments against euthanasia for those who see things from a purely natural point of view.  Yet, the issue runs far deeper than this.  Human beings should not be put to death, nor should they commit suicide, for the simple fact that our life does not belong to us, but to God, Who is the “Master of life and death”.  Our lives are a continuum from this life to the next, and how we live in the hereafter depends on how we live (and die) here.  A large part of that ‘living and dying’ is accepting whatever death God wills to send us, without taking matters into our own hands.

Pope Saint John Paul II lived out his own principles.  He suffered much in his life, the early loss of his mother and brother, growing up under the brutal, bloody regimes of the Nazis and then the Communists; as a priest, he tested and developed his own virtue with strict prayer, study and exercise, developing into an exemplary human being (in fact, a spiritual and intellectual giant, a saint amongst saints). 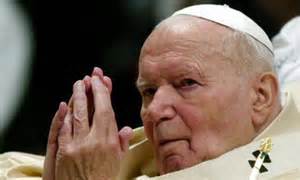 Yet, his greatest test was perhaps his last, when he had to suffer before the world the afflictions of Parkinson’s disease, losing his handsome looks and his great strength, his baritone voice, his capacity not only to ski and swim, but to walk and even care for himself.  By the grace of God, he kept his intellect to the very end (as my previous allusion to his fascinating book Memory and Identity, published in the year of his death, testifies).

John Paul suffered all of this, in union with His God, for reasons that remain mysterious to us, but that we can glean somewhat from his writings.  To suffer in solidarity with those throughout the world who suffer also, to atone for sin, to redeem the world with Christ.

It is sad that Mrs. Maynard, and many like her (most of the comments I have read on her death have been positive) could not, or do not, see the value of such suffering.  What she did was objectively wrong, and, in the strict sense of the word, scandalous, for many may follow her example, but we cannot judge her soul; that is left to the good and merciful God.  What we can hope is that she in the end commended herself to this very mercy of God, and that what she suffered in her brief battle with cancer will lead in the end to her salvation.  She may well have not known what she did.

We can also hope that many more, when faced with the daunting prospect of death, will follow the example of Saint John Paul, and be led into eternity by the path God wills for each of us, joyful, as Saint Paul says, that we can be made ‘partakers of the sufferings of Christ’.